Psychological Risk Factor # 2: Confused Morality: A confused sense of morality is the second Psychological Risk Factor. People with a confused sense of morality cannot differentiate between right and wrong and do not understand the concept of good and bad. They tend to make emotional reasoning to make moral judgments. People who tend to use emotional reasoning while making moral judgments tend to believe that if it makes them feel good it must be a good thing and if it makes them feel bad then it must be a bad thing. As a result of Confused Morality people who are addicted to alcohol and drugs are unable to judge their alcohol and drug use from a moral perspective. They are often unable to see the adverse consequences of their using alcohol and drugs as bad for them. They tend to see them as a price which has to paid to have a good time. Addicted people fail to distinguish between good and evil. They do not know which things to value. They also believe that things of value should always bring them fun, excitement and thrills. They have no idea that to have things of value you must invest time and effort. They cannot see what is good  or bad about  alcohol and drug use for them and the ones they love. When they consider the balance between the good and bad aspects of their drinking and using drugs, what is the right thing for them to do.

The other two Psychological Risk Factors will be discussed in the next blog.

All the Biological and Psychological Risk Factors are explained in detail during the therapy sessions at Sahyog Detox and De addiction Clinic which helps the patients understand why they have become addicted to alcohol and drugs in the first place and that is why Sahyog is the Best Nasha Mukti Kendra in Delhi by far.

Many recovering people form their first relationships in the meetings of Alcoholics Anonymous and Narcotics Anonymous. They are based on the 12 Step Program. The first word in the Steps is “we”. This is an important word. By  using this word the addicts and alcoholics are able to connect with other people and break their relationship with their addictive self. They realize their emotional needs can be met by other people. If this is not done the addict or alcoholic can replace one addiction with another or revert to their old addiction.

All this is explained to patients in Sahyog and that is why it is the Best Nasha Mukti Kendra in Delhi. 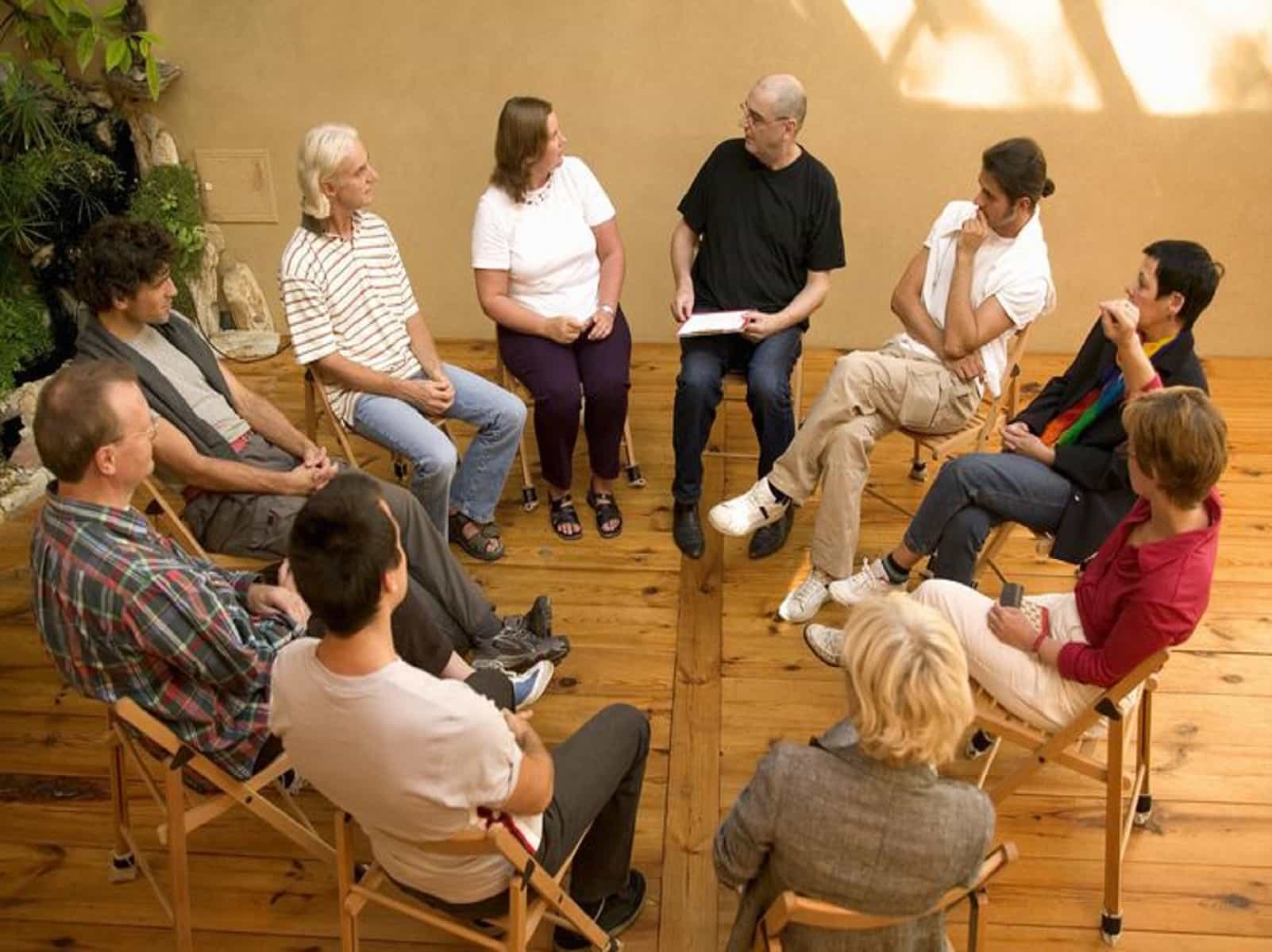 Sahyog Detox and De addiction Clinic is the Best Nasha Mukti Kendra in Delhi by a far margin. It is the Best Nasha Mukti Kendra in Delhi for many reasons, the first and foremost being that it is the only Nasha Mukti Kendra in Delhi which is run by a doctor who himself had problems with alcoholism and drug addiction. That is why we fee that we can treat patients of alcoholism and drug addiction better. We not only use our knowledge but also our experience in treating patients. That coupled with the excellent therapy we provide results in a very good success rate of our patients. As it is the success rate of alcoholism and drug addiction is very low but the success rate of Sahyog is much higher than that of other similar institutions. Alcoholism and drug addiction is a disease and it is a very nasty disease to have. It is nasty because it is the only disease that denies its own existence and resists treatment. The medical definition of alcoholism and drug addiction states that it is a chronic and relapsing disease. The third reason why it is a nasty disease is that the success rate is very low. As mentioned earlier the therapy we provide at Sahyog is beyond comparison. Regular sessions are held daily. The sessions include reading, writing, lecture, group discussion, inventory writing and a mock NA/AA meeting. The day starts with yoga and meditation and ends with meditation.  The aim of all the sessions is to make the person realize that the way they were drinking alcohol or using drugs is wrong and it is in their own best interest to give it up. Unless the patient wants to give it up himself you and I cannot make him give it up. Then we have another saying that it is not difficult to stop but very difficult to stay stopped. If you are an alcoholic or addict you will be able to identify with this statement.

All in all the Best Nasha Mukti Kendra in Delhi is Sahyog.

The Best Nasha Mukti Kendra in Delhi is Sahyog Detox and De addiction Clinic by far. It is the Best Nasha Mukti Kendra in Delhi if not the entire country. It is the Best Nasha Mukti Kendra in Delhi for a variety of reasons, the main reason being that it is run by a doctor who himself had problems with alcoholism and addiction and has been clean and sober for more than 18 years thanks to the 12 Step Program. This is the same program which we follow at Sahyog and try to inculcate in our patients. The 12 Step Program is the most successful modality to treat any addiction. This is a fact which is mentioned even in medical textbooks. It is also a very spiritual program which not only helps to overcome any addiction but also teaches people to become better and good human beings. At Sahyog we deal with all the aspects of alcoholism and addiction like the physical, mental, emotional and spiritual. The physical craving is taken care of by medication which is given to combat the withdrawal symptoms.  But that is only the beginning, medicines are not the cure for alcoholism or addiction. This phase lasts for the initial 5-10 days. The mental obsession takes a bit longer. It takes a few months for it to go away. It is not humanly possible to remove this obsession to use alcohol and drugs. And it is because of this mental obsession that people go back to alcohol or drugs even when their bodies don’t demand it. Only a Higher Power can lift this obsession. The main reason behind any substance abuse is always emotional pain. We may feel it or it may be hidden in our subconscious mind. But it is always the cause of alcoholism or addiction. Through counselling we try to rectify the emotional turmoil of the patient. Next is the spiritual aspect. By spiritual we mean relationships. The alcoholic or addict has no relationship with himself so he is not able to have a good and healthy relationship with family and others. It is a sick and distorted relationship. We teach the patients how to have a good relationship with themselves first and then how to have a relationship with family and others.

All in all Sahyog is the Best Nasha Mukti Kendra in Delhi.

At Sahyog we treat alcoholism and addiction in a holistic manner. All aspects of the disease of alcoholism and addiction are taken care of. The physical craving is dealt with by giving medication during the detox phase. But the treatment is not by medication alone. It is the first step to handle the withdrawals in the initial stage. The treatment is mainly through behavior and group therapy. The mental obsession takes a while longer to go away. It is not humanly possible to remove the obsession to use alcohol and drugs. This can be done only by the Grace of a Higher Power. The Big Book and other literature encourage the patients to find their Higher Power and Trust God. Even agnostics and atheists can benefit from this program. Pain is at the root of any substance abuse problem. The person might say he is doing alcohol or drugs for pleasure but it only to emotionally anesthetize oneself. Regular counselling and talks with the psychologist help in overcoming the emotional pain. As written earlier it is a spiritual program, by spiritual we mean relationships. An alcoholic or an addict does not have any relationship with self forget others. The patients are encouraged to look after themselves, love themselves and remove anger, frustration and resentment so that they can have a better relationship with themselves. They are encouraged to improve relationship with their family also. Third and most important is the relationship with the God of their understanding.

All in all The Best Nasha Mukti Kendra in Delhi is Sahyog Detox and De addiction Clinic. 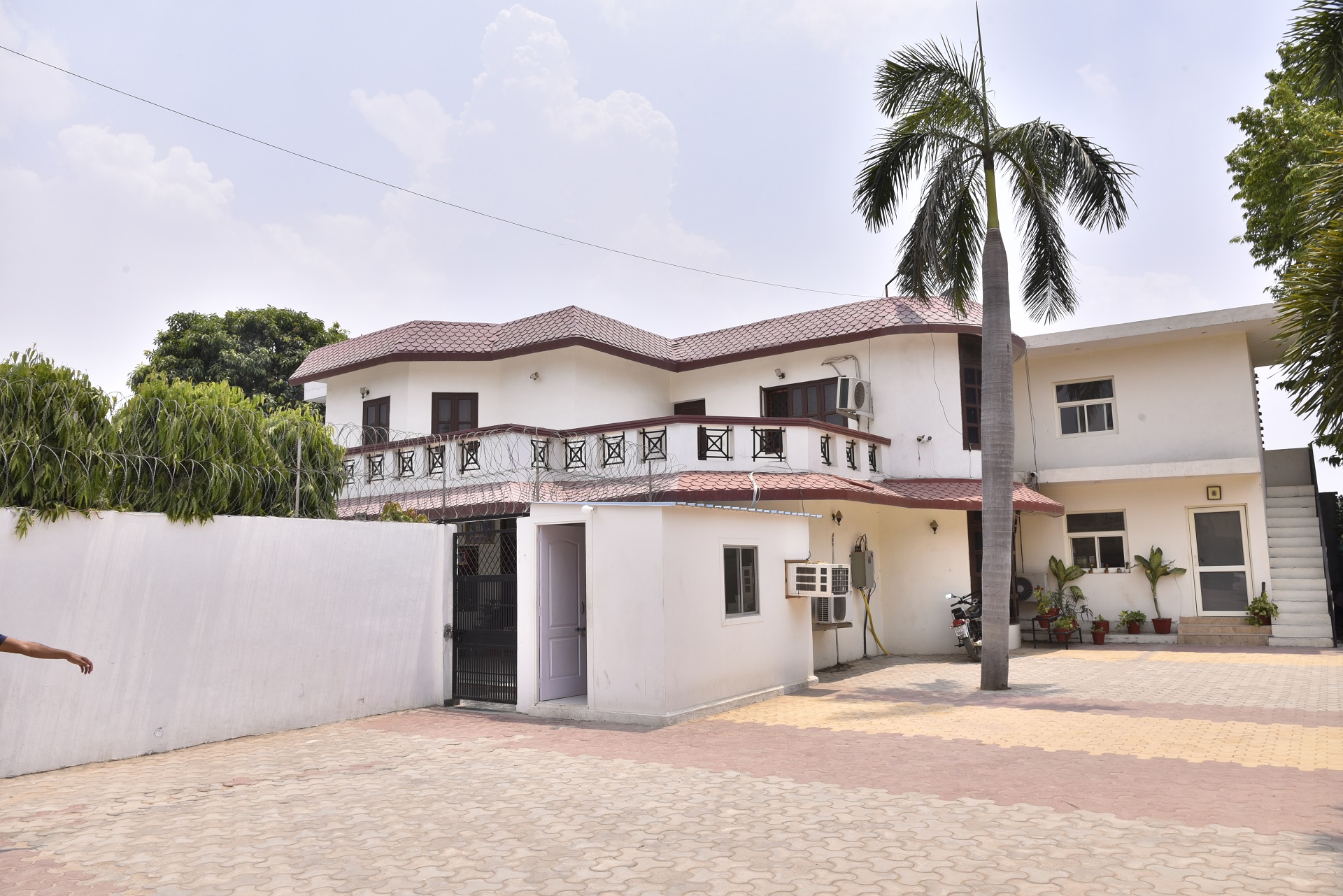 All in all the Best Nasha Mukti Kendra in Delhi is Sahyog. 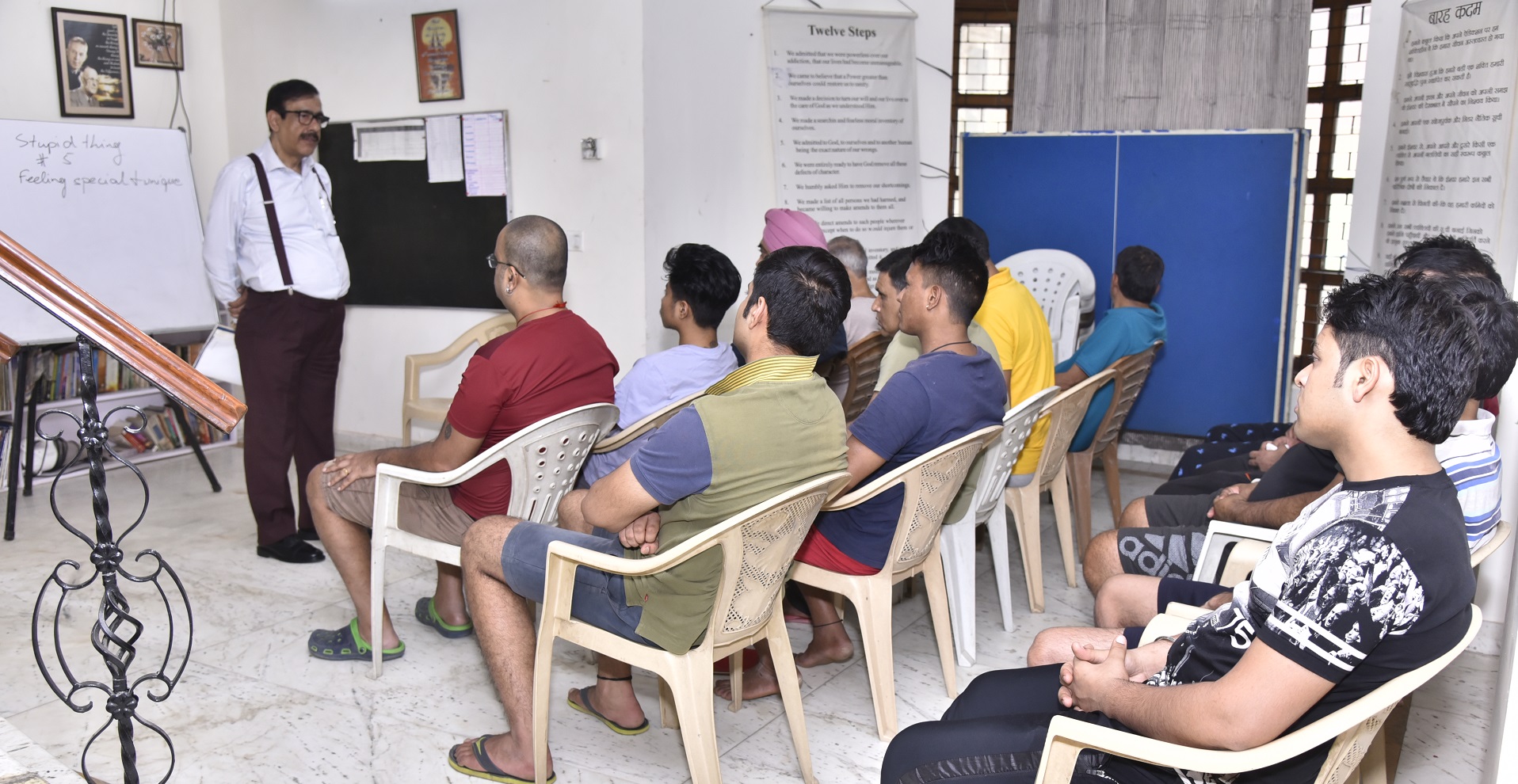 Sahyog Detox and De addiction Clinic is the Best Rehabilitation Center in Delhi for a variety of reasons, namely the success rate, therapy and atmosphere including food. Also, because it is run by a doctor who himself had problems with alcoholism and addiction and has been clean and sober since 2002. For these and many other reasons it is the Best Rehabilitation Center in Delhi.

Wake up is at a comfortable time of seven am followed by the morning tea. That is followed by a session of yoga and meditation. After giving time for morning ablutions breakfast is served. After breakfast five or six sessions are conducted. The sessions are a part of group therapy which is the basis of our treatment. The first session is the reading session where books from Alcoholics Anonymous and Narcotics Anonymous are read. Second session is the writing session where first the patients write about themselves and later on the Twelve Steps. After that there is a session called the Input which is akin to a lecture and is about the disease of alcoholism and addiction and the Twelve Steps. After that lunch is served followed by rest time. After that there is a session called Group Discussion in which the patients relate the topic of Input to their own lives and share about themselves. Three days in a week patients write their thoughts and feelings and share them with the counsellor. That is followed by free time in which the patients can play chess, carom and other indoor games and also table tennis and badminton. There is a mock Alcoholics Anonymous meeting in the evenings and dinner is again followed by meditation, after which the lights are switched off.

For the kind of therapy which we provide Sahyog Detox and De addiction Clinic is the Best Rehabilitation Center or Nasha Mukti Kendra in Delhi. 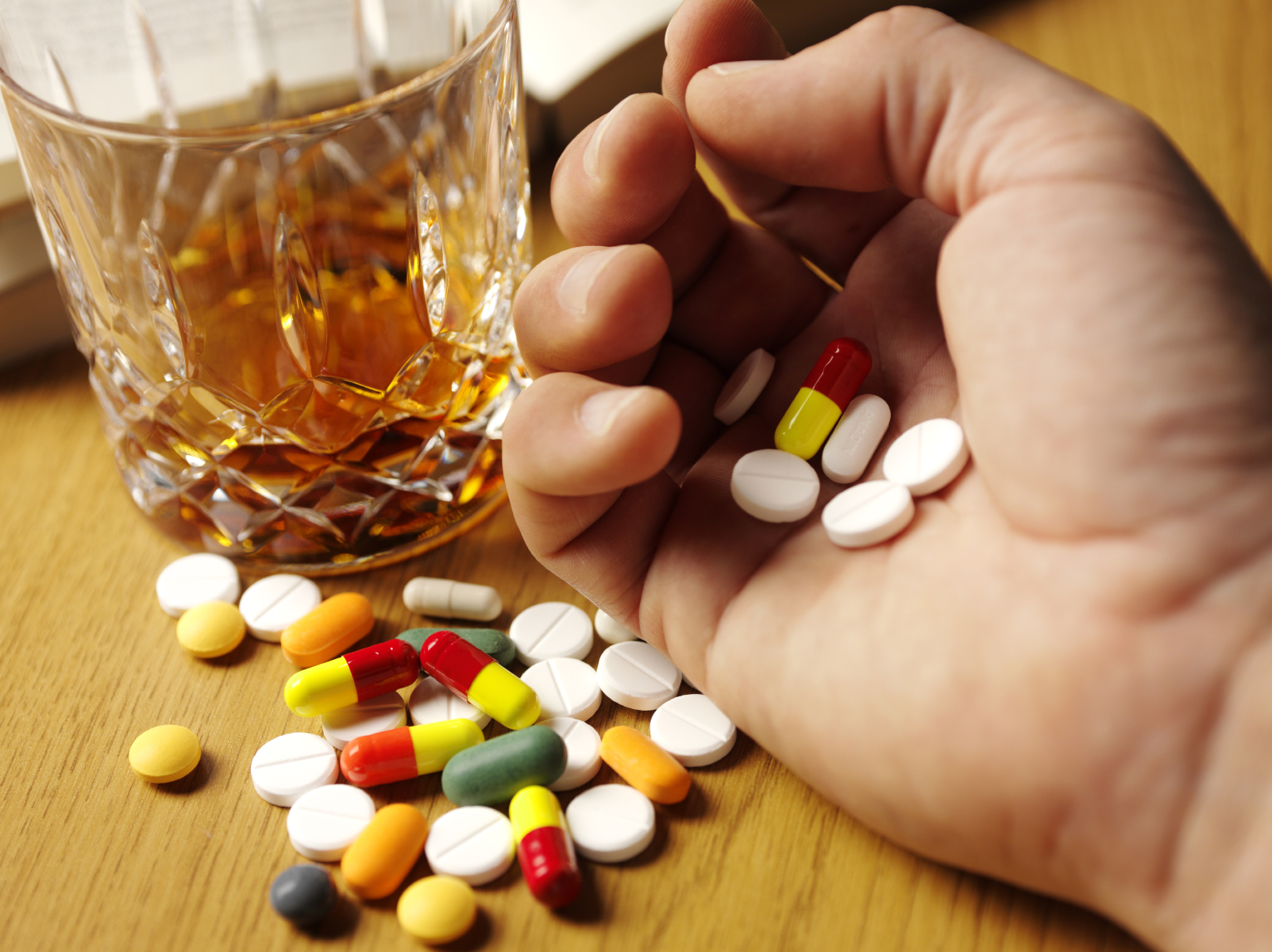