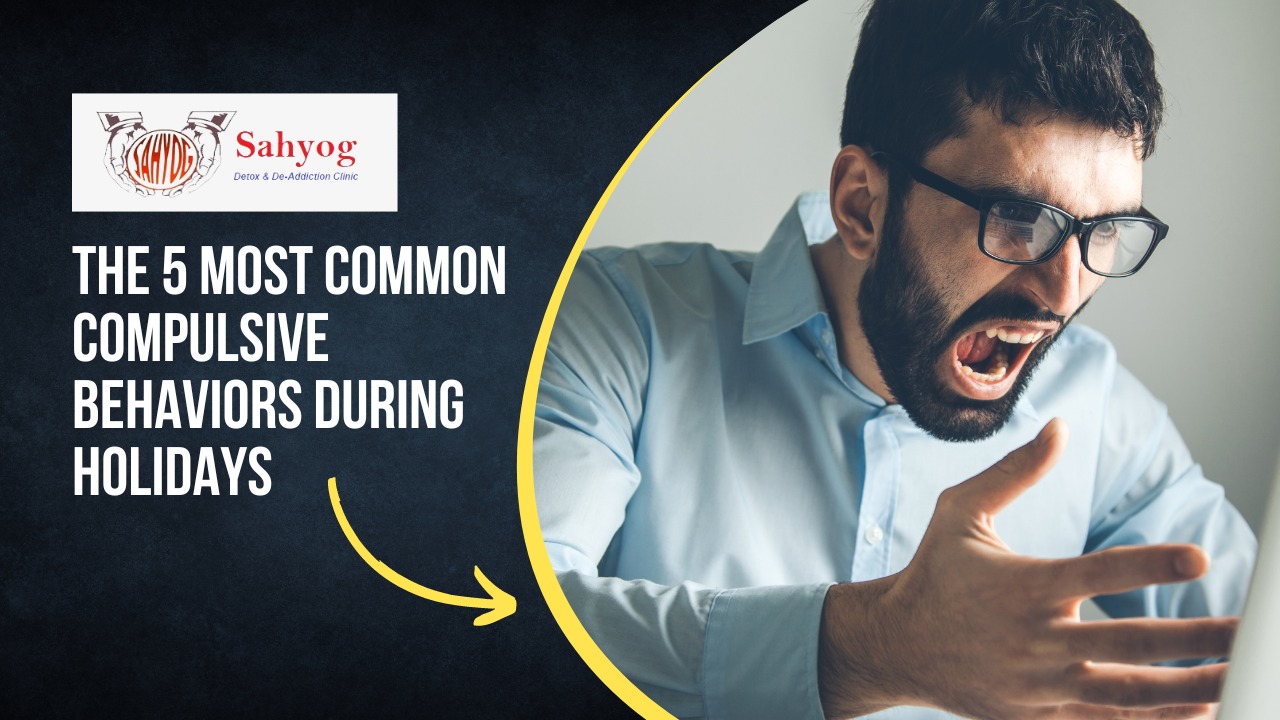 The 5 Most Common Compulsive Behaviors During Holidays

It’s that time of year again – the holidays are around the corner! And for many of us, that means spending time with family and friends, enjoying delicious food and drinks, and maybe even a bit of shopping. But while all of this is fun and excitement, it can also be stressful. That’s because we’re all human – and like everyone else, we sometimes experience compulsions (or “cravings”) during the holidays. During the holidays, people often experience a rush of emotions that can lead to compulsive behaviors.

Here are five of the most common compulsive behaviors during the holidays:

Each of these habits can be hard to break, but with a little effort, you can manage them and have a stress-free holiday season!

One of the most common compulsive behaviors during holidays is spending too much money.

Many people feel they need to buy gifts for loved ones, especially when it’s a special holiday like Christmas or Thanksgiving. This can lead to problems if a person can’t stop themselves from spending money.

This compulsive behavior is usually done out of guilt or to make someone happy. It can be hard to resist the urge to buy a gift for somebody, especially if you haven’t seen them in a while.

The best way to avoid becoming addicted to gift-buying is to limit yourself to one or two gifts. This way, you won’t feel overwhelmed, and you’ll have more money left over to spend on other things. If you absolutely have to buy a gift for someone, try buying something unique or interesting instead of something traditional. That way, they’ll appreciate your creativity even more.

People who compulsively buy Christmas decorations, candy canes, and other holiday goodies often find that they cannot stop once they start. This behavior can be very frustrating for them and their friends and family members, as it takes up a lot of time and energy.

Another one of the common compulsive behaviors during holidays is overeating. Many people find that they can’t resist the urge to eat large amounts of food during the holiday season. This can lead to weight gain and unhealthy eating habits in the future.

Both of these compulsive behaviors are caused by a lack of control over our impulses. When we’re faced with a situation where we have to choose between two options, many of us tend to choose the easier one. But in these situations, easy usually means unhealthily or prematurely consuming something. We need to learn to control our impulses to have healthy relationships and enjoy holidays without resorting to compulsive behaviors.

This behavior of overeating is often triggered by feelings of boredom or loneliness. People who overeat during the holidays are more likely to gain weight and have a higher risk of developing obesity in the future.

Many people feel the need to enjoy all the food that they’re given, and often this leads to overeating. This can be dangerous because it can lead to weight gain and health problems down the line. It’s important to be mindful of how much food you’re eating and to stick to sensible portions.

Overeating can also lead to other health problems, such as heart disease, stroke, and type 2 diabetes. In fact, overindulging during the holidays is one of the main reasons why people end up visiting the doctor during this time of year.

Many people find it difficult to resist the temptation to eat large amounts of food when they are around food that smells good and looks appetizing.

Overeating can lead to weight gain and health problems, including heart disease and diabetes. It can also cause feelings of guilt and regret, as well as feelings of depression and anxiety.

It is important to remember that overeating is not a healthy way to celebrate a holiday. If you find yourself struggling to control your eating habits during the holidays, talk to your doctor or therapist about how you can overcome this problem.

Some people find it difficult to resist the temptation to eat sweets, cake, and other food items. This becomes especially difficult when these foods are surrounded by happy holiday memories.

It is important to be cautious about what you spend during these times and to avoid getting into any physical or financial conflicts with others.

To avoid becoming compulsive eaters during the holidays, try to keep your food intake moderate and focus on healthy, calorie-rich foods. If you find yourself struggling to resist snacks and food throughout the day, try breaking the habit with a willpower exercise like visualization or meditation. With enough effort, you can overcome any holiday compulsion!

One of the most common compulsive behaviors during holidays is shopping. Most people feel the need to purchase something new or special for the holiday season, and shopping becomes a way to relieve stress.

The problem with this behavior is that it can become a lifestyle. People who are constantly shopping become dependent on the retailers and the mall environment. This can lead to problems in other areas of their lives, such as financial instability and debt.

To avoid becoming compulsive shoppers, try to set realistic shopping goals for the holiday season. This way, you’ll have something to aim for instead of feeling overwhelmed by the prospect of buying everything that catches your eye.

Another way to avoid becoming compulsive shoppers is to make a list of what you need and what you want and try not to buy anything that isn’t on that list. This way, you’ll have a better idea of what’s essential to you, and you won’t spend unnecessary money on things that don’t matter to you.

Shopping can be a very enjoyable experience if done in moderation.

However, when shopping becomes a compulsive behavior, it can have negative consequences. Shopping can lead to financial problems if you become overly indebted, and it can also lead to weight gain if you consume too much food.

It is also important to be mindful of how much money you’re spending. If you find yourself getting into financial trouble because of your shopping habits, try to limit yourself to one or two high-priced items. This way, you won’t spend too much money on unnecessary things.

If you are struggling with a compulsive shopping habit, set out to set boundaries. Set limits on how much you will spend, and don’t let yourself be persuaded by salespeople. If you find that you can’t control your shopping habits, talk to a therapist or counselor about your problem. They can help you develop strategies for breaking the cycle of compulsion.

One of the most common compulsive behaviors during holidays is drinking alcohol. This behavior is especially common during Christmas and New Year’s Eve.

Many people feel the need to celebrate with a glass of wine or a beer, even if they’re not actually celebrating anything. This can lead to alcohol poisoning and other health problems. It’s important to be safe and limit your intake of alcohol during holidays so that you don’t end up suffering any consequences.

Drinking alcohol can have a number of negative consequences. It can lead to accidents and injuries, disrupt social gatherings, and affect one’s ability to think clearly. Alcohol also has a negative impact on one’s mood and ability to make wise decisions.

While drinking alcohol is a compulsive behavior, it is important to remember that not all people who drink end up engaging in harmful behavior. In fact, many people who drink responsibly enjoy the holiday celebrations without experiencing any negative consequences.

If you are worried about your own drinking habits, it is advisable to talk to a therapist or other mental health professional. They can help you understand your motivations for drinking and provide helpful tips for managing alcohol consumption responsibly.

One of the most common compulsive behaviors during holidays is gambling. Gambling is the act of playing with money or other items in a hope of winning something. It is usually done with the hope of gaining more money or possessions, but it can also be done for pleasure.

Gambling can be a very dangerous habit. It can lead to financial ruin and addiction, and it can damage relationships. It can also be a way to escape from problems or stressors.

To avoid becoming compulsive gamblers, try to set realistic gambling goals for the holiday season. This way, you’ll have something to aim for instead of feeling overwhelmed by the prospect of winning or losing money.

Another way to avoid becoming compulsive gamblers is to make a list of what you need and what you want and try not to gamble anything that isn’t on that list. This way, you’ll have a better idea of what’s essential to you, and you won’t spend unnecessary money on things that don’t matter to you.

It is important to remember that gambling is not a fun activity. It can be addictive and lead to negative consequences, including debt, heart disease, and addiction. If you are struggling with gambling addiction, please seek help. There are resources available to help you overcome this problem.

As the holidays draw near, many of us find that our normal routines start to fall by the wayside. It’s common to feel a little manic during this time, and as a result we may find ourselves succumbing to some compulsive behaviors.

Here are the five most common compulsive behaviors: overspending, overeating, gambling, drinking too much alcohol, and using drugs or stimulants.

If you’re struggling with any of these compulsive behaviors during the holiday season, don’t worry – there are plenty of resources available to help you get through it without ruining your holiday celebration.