Sahyog ClinicBlogTreatmentAlcoholism: This Addiction Has Several Causes and Treatment 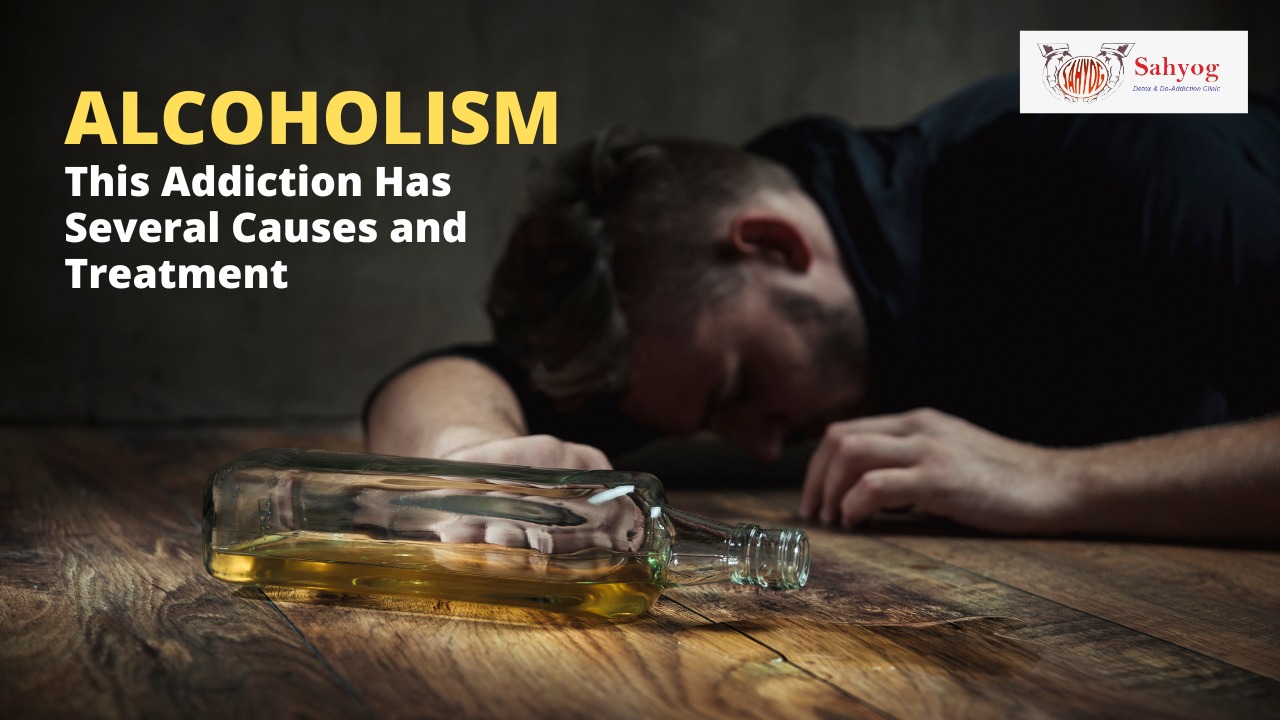 Alcoholism: This Addiction Has Several Causes and Treatment

Alcoholism is a serious addiction that can cause many health problems if left untreated. Although there are numerous causes and effects of alcoholism, it’s important to remember that not everyone who drinks alcohol will become an alcoholic. Even though some cases of alcoholism run in families, the majority of people who drink alcohol never experience addiction or other negative effects. Still, it’s significant to be aware of the symptoms and effects, so you can get help if you notice them in someone you love or yourself.

This guide covers what you need to know about alcoholism to treat it as early as possible. Alcoholism can cause serious issues in your life, whether you’re an occasional drinker or an alcoholic. If you’re concerned that you have an issue with alcohol or know someone who does, you should learn about the causes of alcoholism, the signs of this condition, and how to get treatment for it. You should also be aware of some important facts about the dangers of drinking too much.

There are four types of alcoholics, according to the National Institute on Alcohol Abuse and Alcoholism (NIAAA). They are young adult, functional, chronic, and severe. Young adults are typically in their late teens or early twenties and drink heavily, despite negative consequences of job loss or legal trouble. Functional alcoholics are able to maintain their jobs and responsibilities, but drinking takes up a significant amount of their time and energy. Chronic alcoholics have been drinking for years and may have tried to quit multiple times unsuccessfully. Severe alcoholics can experience withdrawal symptoms after only one day of not drinking, such as anxiety and shakiness. Treatment can vary depending on the type of alcoholic; some need detoxification programs, whereas others just need counseling or medications.

Group therapy in de-addiction is an important part of rehab because it helps with social skills that may be lacking from living life isolated due to alcoholism. However, there are many relapse prevention methods available too, which work to prepare people for an eventual return home by teaching them how to avoid stressful situations that could lead them back into alcohol abuse. One technique is to find someone who will hold them accountable when they feel tempted to drink again. Another way is to create a drinking plan where the person will specify what he or she would do instead of drinking and then follow through with that plan when faced with temptation.

While the exact cause of alcoholism is unknown, there is evidence that it can be hereditary. Studies have shown that children of alcoholics are more likely to become alcoholics themselves, even if they are raised in a non-alcoholic home. Additionally, people with certain genes are more likely to develop alcoholism. Environmental factors (five sentences): While genetics may play a role in alcoholism, environmental factors are also thought to contribute. For example, some evidence suggests that drinking alcohol as a child increases the risk for developing alcoholism later on. Alcohol abuse can lead to lower self-esteem, depression, anxiety, and an increased risk for developing mental health disorders like schizophrenia or depression. It can also result in liver disease, pancreatitis, cancer, high blood pressure, and other serious conditions.

The best way to treat alcoholism is by abstaining from alcohol completely; however this often leads to withdrawal symptoms that include tremors, seizures, delirium treens which includes hallucinations and agitation. To avoid these withdrawals, a person addicted to alcohol can go through detoxification at a hospital or clinic. There are various types of detoxification available including outpatient detox where the person does not stay overnight but instead stays for 3-5 days at most and goes through withdrawal under medical supervision, inpatient detox where the person remains at the facility throughout the process, and rapid detox where medications are used to induce intoxication so that severe withdrawals don’t occur.

Alcoholism is a serious problem that can affect anyone, regardless of gender. Though it is typically thought of as a man’s disease, alcoholism impacts women just as frequently as men. In fact, according to the National Institute on Alcohol Abuse and Alcoholism, about 17 million American adults suffer from alcohol use disorder. Of these 17 million people, more than 11 million are female. The number of women who drink in excess is higher than men for many reasons, but these include societal pressure to act like a lady, depression which leads to alcoholism and social expectations for female conduct.

A common misconception is that drinking wine or other alcoholic beverages with dinner helps one lose weight. There are three major issues with this idea. First, drinks containing sugar (such as mixed drinks) will not help you burn calories or keep your body fuelled because sugar does not give your body energy in the same way that protein does. Second, when mixed drinks contain high-calorie ingredients such as juice and soda, they may actually cause you to gain weight because liquid calories do not satisfy hunger pangs as well as solid food calories do. Finally, there is some evidence that heavy drinkers have less appetite-suppressing hormones than light drinkers. Therefore, those who consume large amounts of alcohol have an increased risk of becoming overweight and developing health problems related to being overweight.

In addition to the genetic, medical, and psychological causes of alcoholism, there are also social and environmental factors that can contribute to the development of this addiction disease. For example, people who come from families with a history of alcoholism or who associate with heavy drinkers are more likely to develop alcoholism themselves. Additionally, people who have easy access to alcohol or who live in environments where drinking is encouraged are also at higher risk. Alcohol abuse may begin for some people when they’re still very young, such as teenagers who drink because their parents do not monitor them closely enough.

Regardless of how it starts, alcohol abuse can turn into alcoholism if not treated soon enough. Treatment typically includes either medication or psychotherapy, which both take time and commitment for the patient. If left untreated, alcoholism can lead to serious health problems including liver failure, brain damage, an increased risk of cancer, heart attack and stroke. Other consequences include impaired judgment, which can lead to suicide attempts and accidental death by overdose. These consequences affect not only the person suffering from alcoholism but also those around him or her like family members. The good news is that alcoholism is treatable and recovery is possible. Alcoholics Anonymous (AA) provides support groups, self-help manuals, and other resources to help to recover alcoholics and maintain sobriety.

Getting the right treatment

If you or a loved one is struggling with alcoholism, it’s important to get the appropriate treatment. There are many types of alcoholism, and each type requires a different approach to treatment. The first step is to identify the type of alcoholism from which the person suffers. Then, an individualized treatment plan can be created to address the specific needs of the alcoholic. Many types of treatments are available, so it’s significant to find one that will work for the individual. With the right treatment, recovery is possible. Treatment can take anywhere from three months to two years, depending on the severity of the addiction. It’s also significant to note that while abstinence is a goal in alcohol treatment, not everyone achieves this goal.

Treatment typically includes therapy sessions, counseling sessions and social support groups where recovering alcoholics learn how to cope without drinking as well as staying sober. Some people opt for self-help programs like Alcoholics Anonymous, which provide individuals with peer-to-peer help and advice on living life without alcohol. Another common aspect of treatment is rehabilitation programs, where patients live at a facility while they detoxify and recover from their addiction/alcoholism. Once the patient leaves rehab, it’s important to stay connected to others who have shared experiences by attending regular AA meetings or joining online forums.

Alcoholism is a serious addiction and a problem that can have disastrous consequences. If you think you might have an issue with alcohol, it’s influential to seek help. There are many resources available to help you get on the road to recovery. With the right support, you can overcome this addiction and lead a healthy, happy life. The effects of alcoholism are far-reaching and devastating; people who drink heavily often neglect their responsibilities at home, work, or school. People in these positions may not be able to hold down a job or maintain relationships outside drinking circles.

Furthermore, heavy drinkers may not be able to meet their basic needs such as food and shelter because they’re spending all their money on alcohol. Many times, those addicted to alcohol turn to criminal activity to fund their addiction. They may steal from friends and family members, commit fraud against insurance companies, commit crimes like robbery and burglary, so they can get cash for more alcohol–whatever it takes to keep them drunk. And finally, if left untreated, chronic alcoholism can kill. Heavy drinkers are much more likely to die prematurely than non-drinkers because alcohol abuse affects every system in the body, including the brain and heart. These organs wear out faster and fail sooner when constantly being exposed to high levels of toxins.