Sahyog ClinicBlogMedical InformationLSD Addiction: What Impact Does It Have On Your Health? 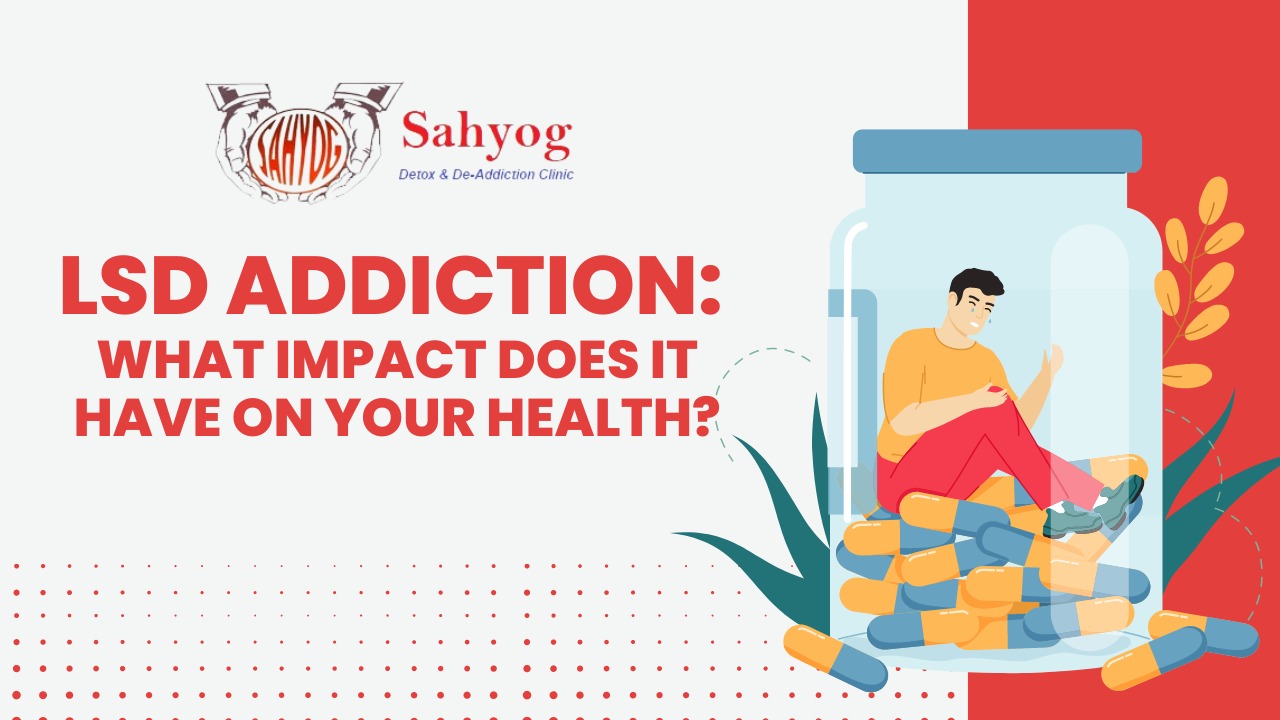 LSD Addiction: What Impact Does It Have On Your Health?

LSD addiction can have a serious impact on your health, both physically and mentally. Here, we’ll take a look at some physical side effects of LSD abuse, as well as the psychological consequences of addiction.

LSD (lysergic acid diethylamide) is a psychoactive drug that was first synthesized in 1938. It is used mainly as a recreational drug, but can also be used to treat various medical conditions. LSD is classified as a Schedule I drug by the US Drug Enforcement Administration.

LSD is most commonly absorbed through the mouth, and it can cause changes in mood and perception. It is also known to be addictive, and long-term use can lead to serious mental health problems, such as addiction.

LSD is a type of drug that is made from a chemical called Lysergic acid. It is often used as a recreational drug because it can produce feelings of happiness, euphoria, and well-being.

However, LSD can also have negative effects on your health if you use it repeatedly or in high doses.

So, what impact does LSD addiction have on your health? While there is no easy answer, using LSD regularly can be harmful to your health in many ways.

How Does LSD Affect the Brain?

LSD is a drug that is known to produce effects such as altered perceptions, changes in mood, and altered sensory experiences. LSD addiction can have a significant impact on an individual’s health and well-being.

It can cause psychiatric problems, including severe panic and anxiety attacks, hallucinations, and delusions. Additionally, LSD use can increase the risk of developing other mental health conditions, such as addiction to other substances.

It can also damage the brain in ways that may have long-term effects. LSD can cause changes in brain function, such as impairments in memory and learning, changes in mood and personality, and changes in coordination and balance.

LSD is also known to be addictive, and long-term use can lead to dependence and addiction. There is still much unknown about the long-term effects of LSD use on the brain, and further research is needed to better understand the risks and benefits of this drug.

What Are the Effects of LSD Addiction on a Person’s Health?

LSD is a Class A drug in the UK and is highly addictive. It can have serious health consequences if used regularly and can cause problems with your mental health, memory, and cognitive function.

There are a number of long-term effects of LSD use that are still being studied: for example, it has been linked to problems with your brain’s serotonin system, which can lead to depression and other mental health issues.

LSD also has short-term effects on physical health. For example, it can increase heart rate and blood pressure, and cause hallucinations and paranoia.

There are also some potential dangers associated with using other drugs while you’re on LSD, such as mixing them and taking too much at once. Therefore, it’s important to be careful and know what could happen if you take LSD with other drugs.

How Do You Know If You’re Addicted to LSD?

If you’re using LSD frequently, and it’s causing you problems in your life, then you may be addicted to the drug. Here are five ways to know if you’re addicted to LSD:

If you’re addicted to LSD, it’s important to get help. There are many programs available that can help you quit using LSD and restore your life.

If you’re using LSD, it’s important to talk to a doctor or therapist.

What Can You Do If You Have LSD Addiction?

Also, make sure that you are getting enough exercise and sleep. LSD can have a negative impact on your mood, and you have to be able to rest if you would like to recover from your LSD addiction.

Physical Side Effects of LSD Abuse

LSD abuse can have a number of serious physical side effects, including:

The addiction can have a serious impact on your mental health, including:

If you or a loved one is struggling with this addiction, please don’t hesitate to seek help. There are a number of resources available to help those in need, including addiction treatment centers and self-help groups.

LSD addiction is a growing problem, and it’s having a serious impact on the health of people all around the world. People who are addicted to LSD don’t just have trouble functioning day-to-day – they can suffer from an array of mental and physical health problems.

If you think that you or a loved one may be addicted to LSD, it’s important to seek help. There are a number of resources available to support those in need, including addiction treatment centers and self-help groups. If you decide to go it alone, be aware of the risks involved and know that you won’t be able to recover without professional help.

If you or someone you know is struggling with LSD addiction, please reach out for help. There are many resources available to help you get through this difficult time.