Sahyog ClinicBlogMedical InformationWhat are the ways to recognize your alcohol dependency? 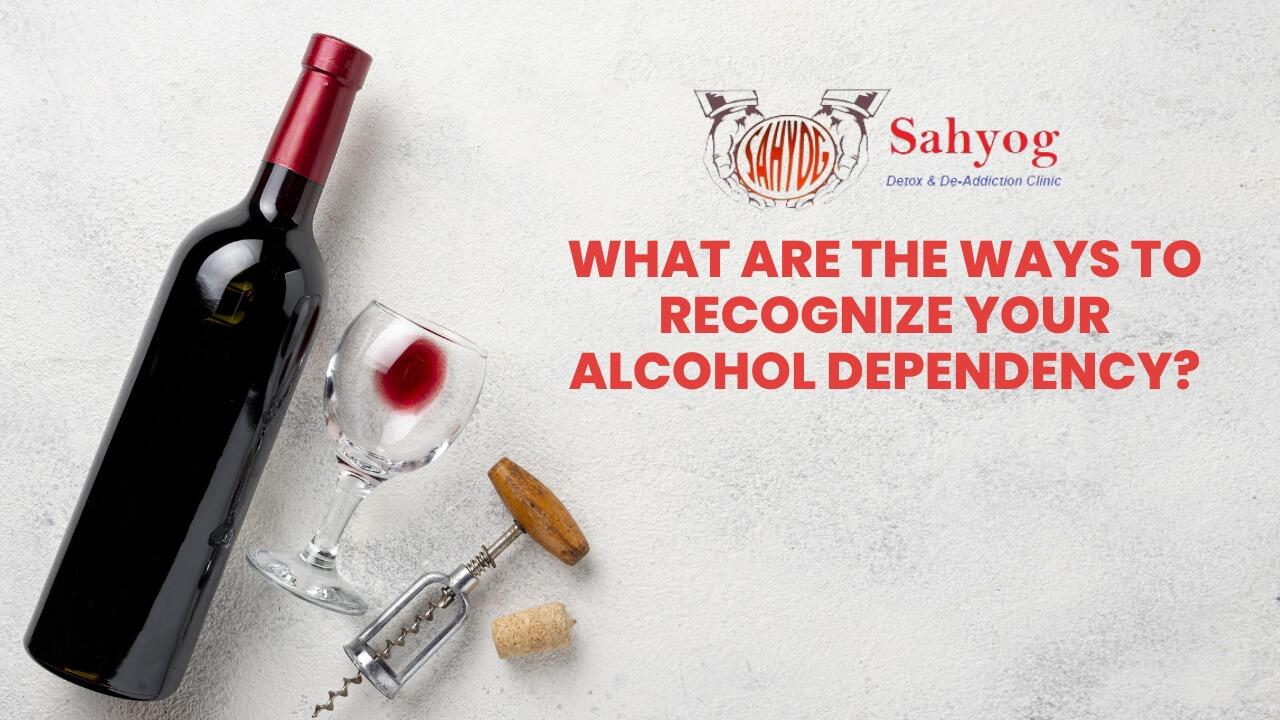 What are the ways to recognize your alcohol dependency?

Alcohol dependency is any desire to control your drinking or continue drinking despite problems in your life that are caused or worsened by drinking. So, how do you know if you have an alcohol dependency? Most people with an alcohol dependency have experienced negative consequences of drinking, such as job loss, accidents, and other issues caused by the amount they drink, their inability to stop once they’ve started, or their withdrawal symptoms when they try to quit. Alcohol dependency can start off innocently enough, with just an occasional beer or glass of wine to have fun and unwind after work or during the weekend.

While it’s entirely possible to enjoy alcohol in moderation, it becomes an issue when your drinking begins to take over your life and interfere with your ability to do things you enjoy or need to do, like go to work, spend time with your family, or get enough sleep. If you find yourself facing these issues with alcohol, then you might be developing an alcohol dependency and should consider seeking help from someone with experience treating addiction issues.

When you’re dependent on alcohol, you can’t imagine life without it. You think about drinking all the time and feel anxious when you’re not drinking. You also build up a tolerance, so you need to drink more and more to get the same buzz. Physical Dependence (five sentences): When you’re physically dependent on alcohol, you experience withdrawal symptoms like shaking, sweating, and nausea when you try to quit. You might also have blackouts, meaning you can’t remember what happened while you were drinking. Mental and physical dependence can be signs of addiction. Addiction is characterized by an inability to control your intake of alcohol despite negative consequences. There’s no set number for how much is too much for every person, but any form of alcohol use disorder could lead to problems in relationships, health, or employment.

If you’ve been diagnosed with alcoholism or know that your alcohol use has crossed into unhealthy territory, there are treatment options available. These range from self-help groups like Alcoholics Anonymous to detox programs that address the mental aspects of addiction as well as the physical cravings. Some people opt for outpatient care, which may include therapy sessions, group counseling, or medication to help them transition back into sobriety. Whatever option you choose, professional help is essential to successfully overcoming alcohol abuse. Remember that you don’t have to go through this alone. The first step is admitting there’s a concern, and then seeking resources that will help take you down the path towards recovery. It won’t be easy, but it will definitely be worth it.

Long-term alcoholics often develop a psychological dependence on alcohol. This means that they feel that they need to drink to cope with their problems, relieve stress, or feel happy. They may try to quit drinking, but find that they can’t because they’re too anxious or depressed without alcohol. If you think you might be psychologically dependent on alcohol, talk to a doctor or therapist who can help you assess your dependency and find treatment options. Alcohol is a powerful drug, so it’s important not to try quitting cold turkey. You may need medical supervision while withdrawing from alcohol. It’s influential to have people around you who will support you and keep an eye on your progress during this time. Some people may also require medication like Xanax (alprazolam) for anxiety, Valium (diazepam) for depression, or Vivitrol (naltrexone) for cravings and relapse prevention.

Remember that alcoholism is a chronic disease; you don’t get over it, you manage it. Make sure to take care of yourself by getting plenty of sleep, eating well, staying active, and practising relaxation techniques. And make sure not to have any expectations of being normal again—this feeling will only lead to disappointment when things don’t go as planned. If you start feeling better about life, then congratulations! You’ve successfully made it through one day of sobriety. If you still want to continue sobering up, let someone know what you’re doing. Sometimes people become tempted after all the hard work they put into sobriety and may want to give up before anything has been accomplished.

Another way to tell if you are addicted is if other behaviours in your life change because of how much you drink. For example, if you were previously able to maintain healthy relationships with friends and family members but now can’t seem to function properly without alcohol, there could be a problem. Additionally, those who use alcohol excessively sometimes have legal concerns due to drink-driving or public intoxication arrests. However, these factors do not always mean addiction. In numerous instances, it takes several years of regular heavy drinking before developing an addiction. Alcoholism is characterized by continued consumption of alcohol despite obvious physical or social consequences, including occupational hazards, violence, financial difficulties, blackouts, hangovers.

Alcohol abuse includes binge drinking–consuming large amounts of alcohol within a short period of time–as well as going out to bars every night with the sole purpose of getting drunk. There are many forms and degrees to which an individual can abuse alcohol. The National Institute on Alcohol Abuse and Alcoholism defines alcohol abuse as the excessive or inappropriate use of alcohol leading to health and safety risks, such as neglecting responsibilities at home, school, or work. Withdrawal symptoms are usually not involved. Binge-drinking is a common form of alcohol abuse that is defined by the National Institute on Drug Abuse as drinking five or more drinks per occasion for men, and four or more drinks per occasion for women.

The term addiction does not only refer to dependency on substances such as drugs or alcohol but can also include dependency on activities such as gambling or sex. The first step in overcoming any form of addiction is recognizing that you have a problem, and then admitting it to yourself and others. It’s important to understand what triggers your addictive behaviour, which will help you find appropriate ways of managing it without resorting back to old habits.

When you notice an urge coming on, start by taking three deep breaths and telling yourself out loud: I can do this. Talk with a friend about how you’re feeling, set up an appointment with your therapist for a session. Create a plan for when the urge comes up again so that you don’t give into temptation at all. Remind yourself why you want to change; consider what life would be like if you continued living in the same way. There may be times when things get tough and cravings return stronger than before, especially during stressful periods or holidays.

One way to get through these rough patches is practising mindfulness techniques, like focusing on breathing deeply from your stomach instead of shallow breaths from your chest. You can also practice mindful eating, which means chewing each bite slowly and tasting food rather than wolfing it down. Pay attention to the sensations in your body while doing both of these exercises. Your hunger should disappear naturally, and you’ll feel more grounded. After a few weeks of maintaining this habit, many people say they no longer crave their favourite unhealthy foods any more. Finally, we all need some relief occasionally. If you know there’s going to be lots of cake at a holiday party tomorrow night, and you really want some right now—go ahead! But just make sure it doesn’t happen again tomorrow night.

If you find that you’re unable to stick to set limits on how much alcohol you drink, or if you often drink more than you intended to, this may be a sign of abuse. Drinking should never interfere with work, school, or home life responsibilities. If it does, this is another sign of possible abuse. Additionally, if drinking leads to financial, legal, or relationship problems, it’s likely that abuse is present. Physical signs can include red and bloodshot eyes, morning-after nausea and vomiting, unusual mood swings, weight loss or gain, decreased coordination, and slurred speech. In addition to these physical symptoms, there are also psychological symptoms such as paranoia and insomnia. When someone has experienced an episode of alcohol withdrawal delirium (the DTs), they will have tremors and hallucinations.

Alcohol dependency can lead to numerous health issues like cirrhosis of the liver. For example, heavy drinkers may experience an increased risk for cancer of the mouth, throat, esophagus, breast, and colon. If you’re experiencing any of these effects from alcohol use, then it’s important to seek help through detoxification programs or rehabilitation centres.

If you think you might have a problem with alcohol, it’s significant to get help as soon as possible. There are a few different ways to get help, including seeking out individual counseling, joining an Alcoholics Anonymous (AA) group, and attending Alcoholics Anonymous meetings in person or online. Additionally, many treatment centres offer some form of therapy that can be helpful for people who need additional support outside of AA meetings. The most significant thing is to find a counselor or therapist who understands your individual needs and works well with you on an ongoing basis; someone who will be there when you’re tempted to drink again after making a promise not to do so any more! In addition, if you have children, there are some parenting programs available for people struggling with alcohol addiction.

The bottom line is that if you feel like your drinking is getting in the way of things that are important to you, whether it’s spending time with friends and family or trying to maintain a job or make ends meet financially, then something may be wrong.

If you wonder whether you have a drinking problem, it’s significant to be honest with yourself and look at your behaviour objectively. Do you drink more than you’d like to? Do you feel like you need to drink to have fun or relax? Are you ever embarrassed by your drinking behaviour? If you answered yes to any of these questions, you might have a drinking concern. If you’re concerned about your drinking, it’s significant to reach out for help. Al-Anon is an excellent resource for friends and family members of alcoholics who want to offer support but not enable their loved one.

Mental health professionals can provide treatment for alcoholism, as well as help you figure out what may have led to your addiction in the first place. Alcoholism isn’t something that should be taken lightly; if you think you might have a problem, speak up. The sooner you seek help, the better chance you’ll have of kicking the habit.