Sahyog ClinicBlogMedical InformationWhat are the Symptoms of Caffeine Withdrawal? 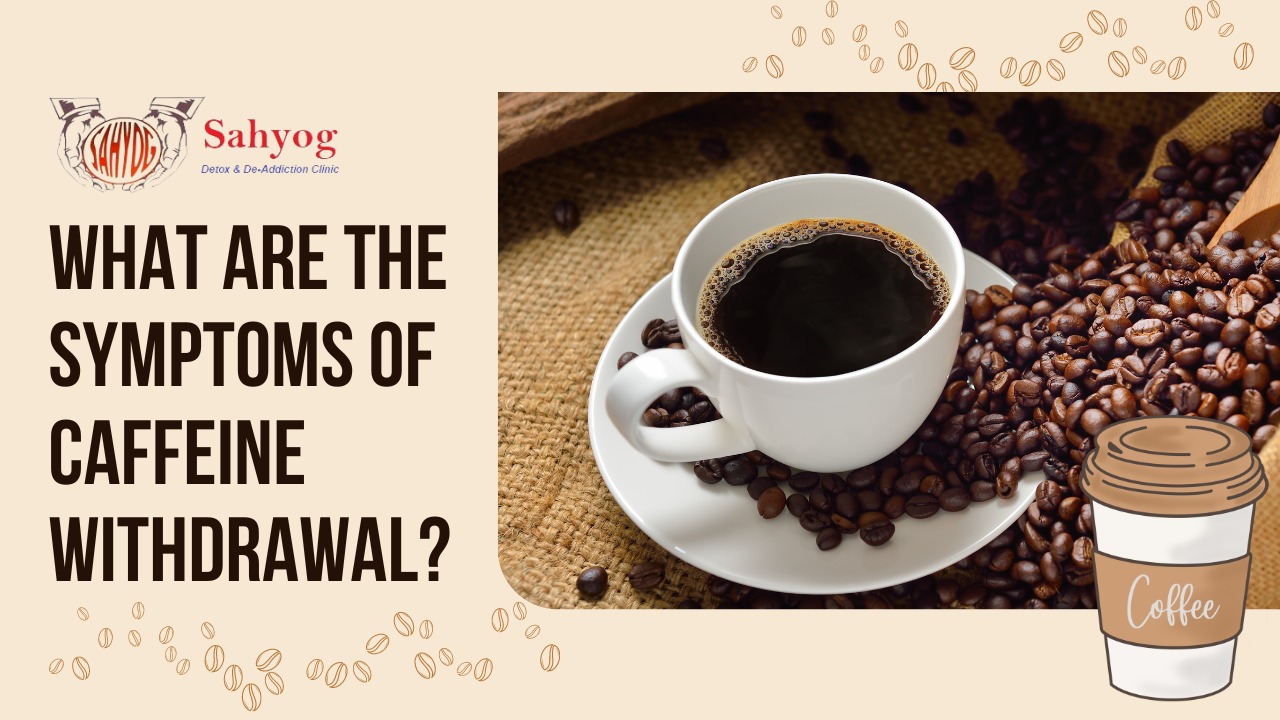 What are the Symptoms of Caffeine Withdrawal?

Caffeine is one of the most common drugs in the world, and the majority of people consume it daily in some form, whether that’s through coffee, tea, soda, or energy drinks. While caffeine isn’t something that all people need to avoid due to medical reasons, if you consume too much caffeine, you could find yourself suffering from withdrawal symptoms if you abruptly stop drinking caffeinated beverages after consistently drinking them regularly over time. When attempting to go cold turkey off your favourite caffeinated drink, watch out for these caffeine withdrawal symptoms. Many of us take caffeine every day in one form or another, whether it’s in our morning coffee, our soda at lunch, or the chocolate we eat as an afternoon snack.

It’s actually quite difficult to consume enough caffeine to get addicted to it, but that doesn’t mean you can’t develop some kind of dependency on it. For many people, this means experiencing withdrawal symptoms when they cut back on their caffeine intake too much or go without it altogether. Caffeine withdrawal symptoms are often experienced by coffee or energy drink addicts, but they can be felt by people who use caffeine regularly in any form, whether it’s coffee, soda, tea, or other sources. If you’re considering kicking your caffeine habit, make sure you know what you might be in for – these are the most common symptoms of caffeine withdrawal to watch out for.

One of the most common symptoms of caffeine withdrawal is trouble sleeping. This can manifest as difficulty falling asleep, waking up frequently during the night, or feeling exhausted upon waking up in the morning. If you’re used to drinking coffee or other caffeinated beverages every day, you may find yourself feeling restless and unable to sleep when you try to cut back. Your body has grown accustomed to a certain level of caffeine, so when you stop consuming it, your body starts craving it again. Withdrawal symptoms may also include headaches and irritability. As much as some people love their daily dose of caffeine, it’s best to taper off gradually instead of going cold turkey.

Stopping all at once can cause physical discomfort and make addiction worse for some people. Gradually reduce your intake over a period of days or weeks until you’ve stopped completely if this is what you want to do.

The most common symptom of caffeine withdrawal is a headache. Headaches can be mild to severe, and may last for a few days. Other symptoms include fatigue, irritability, difficulty concentrating, and flu-like symptoms. Caffeine dependence is possible with prolonged use. A serious concern is addiction, which can develop after just three weeks of daily use. Symptoms typically lessen within five days as the body detoxifies itself from caffeine.

Caffeine intake has been shown to have an addictive quality like other stimulants such as nicotine or cocaine in some people who consume it daily. In addition, studies have also found that long-term consumption of high doses of caffeine by pregnant women can lead to increased risk of miscarriage. It’s not clear if this is due to the caffeine or something else entirely, but either way, it’s recommended that pregnant women limit their intake of caffeinated beverages. There are also concerns about children being too stimulated by drinking caffeinated beverages. Children need sleep and if they drink caffeinated drinks late at night, then they might not get enough sleep.

Drinking coffee can cause anxiety, irregular heartbeats, and insomnia. It can also worsen panic attacks and raise blood pressure. If you’re trying to give up coffee, there are a few things you should know: You’ll experience headaches for a day or two; your stomach will cramp; you’ll feel sick and lethargic; and you’ll experience extreme irritability. To avoid these side effects, try substituting decaf versions of your favourite coffees instead. For example, Starbucks offers a decaf French Roast made with dark roast beans that doesn’t lack any of the rich flavour. Keep in mind though that these types of coffees still contain trace amounts of caffeine, so they shouldn’t be consumed on an empty stomach.

Caffeine withdrawal can cause irritability. This is because your body is used to having caffeine and when it doesn’t get it, it can lead to feelings of irritability. Other symptoms of caffeine withdrawal include headaches, fatigue, and difficulty concentrating. If you’re experiencing these symptoms, it’s best to cut back on your caffeine intake gradually rather than going cold turkey. Cut back by about one cup per day for a week or two until you have weaned yourself off completely. You might also try a low-caffeine alternative like green tea.

The natural compounds in green tea can reduce caffeine cravings and should be enough to satisfy your coffee fix without all the negative side effects. Plus, green tea has lots of other health benefits too! Studies show that drinking three cups of green tea per day can reduce your risk of heart disease by 10%. A recent study even found that people who drink green tea live an average 3 years longer than those who don’t drink any. So while cutting out caffeine entirely might seem tempting at first, there are some pretty good reasons why you shouldn’t do it!

The most common symptom of caffeine withdrawal is fatigue. You may feel tired, sluggish, and like you can’t get going without coffee. This is because caffeine is a stimulant, and when you suddenly stop using it, your body isn’t used to functioning without it. You may find yourself taking naps more often or feeling more exhausted than usual. And even if you don’t drink any coffee during the day, by nighttime you might still be too wired from all that caffeine earlier in the day.

The withdrawal headache: The second most common symptom of caffeine withdrawal is a headache. Occasionally, these headaches will start out as pain at the temples that quickly moves over to both sides of your head and gets worse with time until it becomes unbearable. These headaches usually happen within 12 hours after your last cup of coffee. They generally go away on their own after 24-48 hours, but they can sometimes last up to five days.

Other symptoms of caffeine withdrawal include drowsiness, irritability, muscle twitching, dizziness, flu-like feelings (e.g., nausea), lightheadedness/dizziness, reduced sex drive/libido/sperm count in men; some women experience delayed periods or increased menstrual flow. Symptoms vary depending on how much caffeine you were drinking and how long you were drinking it for. You can minimize withdrawal symptoms by gradually decreasing your intake of caffeine rather than stopping abruptly. If you want to quit drinking coffee altogether, try limiting yourself to one cup per day for a week before dropping back down to one cup every other day for another week before finally quitting altogether.

When you’re used to having caffeine every day, you may feel like you can’t get going without it. You may have trouble mustering up the energy to do even simple tasks. This can be one of the most difficult aspects of withdrawal, as it can make it tough to stick with your decision to quit. The best way to combat this is by setting realistic goals for yourself and gradually increasing them over time. If you find that a goal is too ambitious, set it back a little until you start meeting them again. Be sure to also continue taking care of yourself-go for walks, exercise or just spend some quality time alone! The more you take care of yourself in these ways, the better you’ll feel and the more likely you’ll be able to reach your goals.

However, if you start feeling unusually irritable or depressed during your withdrawal period, consult a doctor before continuing. Doctors usually prescribe antidepressants for people who experience major depression during their withdrawal from caffeine. It’s important to note that not everyone experiences major depression when they stop drinking caffeinated beverages, but it does happen in some cases. This symptom is also known as caffeine blues.

Another common symptom of caffeine withdrawal is headaches–you might experience headaches on top of other symptoms mentioned above or on their own, depending on how much coffee you were drinking and how quickly you decide to stop drinking it. That being said, if you don’t drink any more caffeine after experiencing a headache, and it doesn’t go away within an hour or two, there could be something else wrong. Consult your doctor immediately because the headache could be caused by something serious such as meningitis.

Symptoms of caffeine withdrawal can include depression. This is because caffeine affects the levels of certain chemicals in your brain, including serotonin. When you suddenly stop consuming caffeine, your brain doesn’t have enough serotonin, which can lead to feelings of sadness and low energy. In addition, sleep problems like insomnia may arise due to a lack of melatonin (which can also be impacted by the consumption or lack thereof of caffeine). Other symptoms include headaches, muscle pain, vomiting, and more. These side effects are typically only temporary and will go away within a few days as your body adjusts to being caffeine-free. Caffeine withdrawals usually happen when people drink coffee every day for an extended period of time, such as five years or more. The best way to avoid feeling these symptoms is to gradually decrease your daily intake over time instead of just stopping abruptly.

Caffeine is a drug that many people rely on to get through the day. However, it is possible to become addicted to caffeine and experience withdrawal symptoms when you try to quit. Symptoms of caffeine withdrawal can include headaches, fatigue, irritability, and difficulty concentrating. If you are attempting to quit caffeine, it is important to be aware of these potential symptoms and plan accordingly. You may want to drink lots of water, rest more often, or limit your social engagements for the first few days after quitting caffeine. The good news is that most people find that their energy levels and mood return to normal after about two weeks without caffeine! Some individuals who have been consuming large amounts of caffeine over an extended period of time will need to taper off slowly to avoid withdrawal symptoms.

The effects of caffeine vary from person to person, but there are some general guidelines as well as some warning signs that should not be ignored. If you have experienced any heart palpitations or chest pain while consuming high doses of caffeine, speak with your doctor immediately. It could be due to increased blood pressure or something else entirely. It is also worth noting that pregnant women and those with underlying medical conditions such as anxiety disorders, depression, ulcers, liver disease, diabetes mellitus type II, hyperthyroidism, and other medical conditions should speak with their physician before consuming caffeinated beverages.