Sahyog ClinicBlogStudiesDrug abuse in India: most common and dangerous drugs 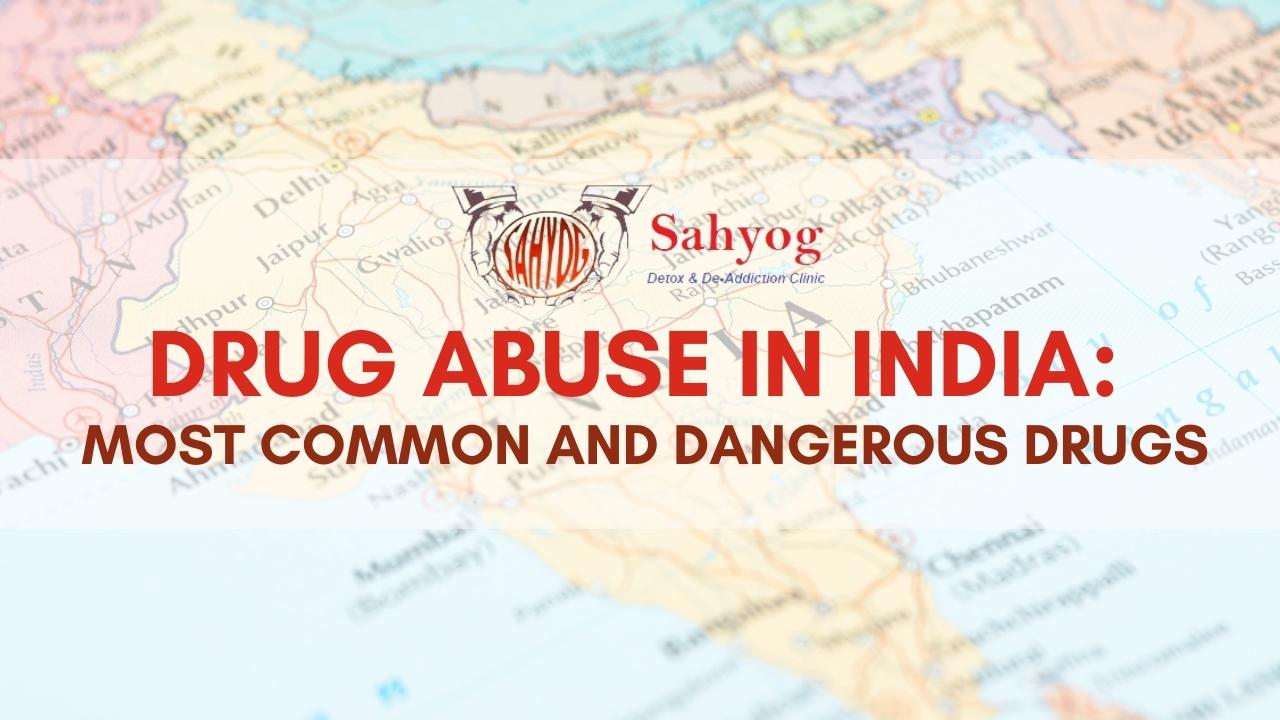 Drug abuse in India: most common and dangerous drugs

Drug abuse in India has raised serious concerns among the society, legal and medical authorities in India. Many people in India get into drug abuse due to social, psychological and other reasons, and they also suffer from its consequences. Some of the most common abused drugs are as follows: Alprazolam, Clonazepam, Diazepam, Ethyl morphine, Fentanyl, Hydrocodone, Hydroxyzine (Ataraxy), Ketamine (ketlar), Ketamine Hydrochloride, Morphine Sulphate, Opium, and Oxycodone Hydrochloride etc.

Most commonly abused drugs in India

Despite having a developed legal framework for dealing with drug addiction, drug abuse remains one of India’s biggest health problems. According to sources from UNODC, a part of UN, there are more than 10 million addicts in India and over 6 million drug users. Most of these are young people between 15-35 years old; also, almost 1/3rd of total hospital admissions are due to drug use. So, What Are The Most Commonly Abused Drugs In India?

Here is a list of top 4 drugs that have been found commonly abused by Indians.

It is an illicit drug obtained from marijuana plant that contains THC (delta-9 tetrahydrocannabinol). It has mild psychedelic effects when consumed which can make you feel relaxed or ‘high’ but it also has negative effects on your brain as well as lungs. Its consumption has been reported to cause addiction. In addition to that, prolonged use of cannabis can cause memory loss and may lead to psychosis. The psychoactive chemical in weed is called delta-9 tetrahydrocannabinol, commonly known as THC. It acts on specific receptors in your brain known as cannabinoid receptors. When these receptors are activated by THC, they send a signal to other nerve cells, causing them to release dopamine into your system. This creates a sensation of pleasure, which motivates people to consume more of these substances.

Hence, THC causes feeling of relaxation and euphoria. There are different strains of cannabis with varying levels of potency depending on how much THC they contain. Some strains have high concentrations of CBD (cannabidiol), which is another active ingredient in the weed that produces calming effects without making you feel high.

These include amphetamines, methamphetamines, and methylenedioxymethamphetamine (MDMA). They all act on neurotransmitters in your brain like serotonin, norepinephrine, and dopamine. These chemicals play a key role in regulating moods, hunger, sleep, and emotions. Drugs like amphetamine increase their level leading to excessive stimulation of nerve cells resulting in increased energy levels and alertness. Later on, followed by depression due to overstimulation of these systems. Many studies show a link between regular amphetamine use and changes in personality such as aggression, hostility, and irritability.

Sedatives refer to any substance that slows down body functions. Commonly abused sedatives include barbiturates, benzodiazepines, and alcohol. People often misuse sedatives for recreational purposes for their ability to induce sleepiness or reduce anxiety, along with being used medically for anxiety disorders such as panic attacks, insomnia etc. These drugs slow down activity of nerves throughout your body which results in lowering heart rate, breathing rate etc leading to drowsiness along with feeling relaxed and calmness. Regular usage of sedatives can result in tolerance building up, thereby requiring higher doses for achieving the same effect, which may lead to harmful consequences of overdose deaths if taken excessively.

Narcotic refers to a group of drugs that directly affect your central nervous system and alters normal functioning of your brain. Opioids such as heroin, opium, morphine, and codeine are commonly misused for recreational purposes, apart from treatment for severe pain. Regular and long-term usage of opioids leads to dependence on them, so users tend to experience withdrawal symptoms upon stopping its usage. Withdrawal symptoms after halting usage includes constipation, diarrhoea, muscle cramps and spasms which persist for a few days before fading away completely.

Heroin is a synthetic opioid with an extremely high risk of addiction. It’s rapidly absorbed into your bloodstream when you inject, snort or smoke it. The drug can cause drowsiness, nausea, vomiting, and constipation as well as respiratory problems. It’s not possible to use heroin safely due to its potency, addictiveness, and potential for overdose. Heroin, which is a common name behind drug abuse, is also responsible for many deaths among users because it suppresses breathing. As a result, if you take too much, you could stop breathing and die. Mixing heroin with other depressants such as alcohol or benzodiazepines increases these risks even further. You should never mix heroin with other depressants unless under medical supervision.

Methamphetamine, a.k.a. speed or ya ba, is a type of synthetic stimulant that increases alertness, energy and confidence, sometimes for several days at a time. It causes an increase in blood pressure and heart rate, as well as an irregular heartbeat, which can lead to cardiac arrest—hence its nickname: Killer Drug. The drug has been linked to psychiatric disorders like schizophrenia. In India, it’s primarily produced in small labs along the border with Myanmar. While meth used to be prevalent among truck drivers and construction workers, it’s now commonly found among young people from middle-class families. (Source: TIME)

2C-B: A psychedelic hallucinogen first synthesized by Alexander Shulgin (the godfather of Ecstasy), 2C-B was popularized by psychologist Leo Zeff who used it during therapy sessions until his death in 2009.

Captagon is a widely abused amphetamine compound. Captagon use is reported to be especially high among young men, particularly those engaged in military or paramilitary operations. It is known as the drug of choice of ISIS fighters. Like other amphetamines, Captagon induces a feeling of euphoria; however, it also leads to extreme paranoia and aggression. The drug can also cause hallucinations similar to what’s seen with schizophrenia. Captagon has been linked to acts of extreme violence and suicide. In addition, users report that taking Captagon increases their endurance for long periods of time without food or water. This effect makes it attractive for soldiers who may need to go days without food or sleep while fighting.

LSD is a powerful psychedelic drug known for its hallucinogenic effects. It distorts visual perception, causes colours to appear more vivid, surfaces to seem rough or textured, and objects to appear distorted, enlarged, or shrunken. LSD can also alter other perceptions of reality such as depth (distances), duration (time) and intensity of emotions. Physical effects of this drug abuse include dilated pupils; higher body temperature; increased heart rate and blood pressure; sweating; loss of appetite; sleeplessness; dry mouth; weakness. The psychological effects of LSD are unpredictable and depend on many factors including personality, mood, expectations, and environment. Although it has been used experimentally by psychiatrists since 1938 to help them understand schizophrenia, there is no evidence that LSD itself produces any mental illness or psychosis. However, people who take it may experience terrifying thoughts and feelings while on it that they may not remember after their trip ends.

Benzodiazepines are commonly used to treat anxiety and insomnia. They are sedatives that have a calming effect. BZDs act by enhancing natural brain chemicals—called GABA (gamma-aminobutyric acid)—that work as downers in the central nervous system. The primary risk of BZDs is addiction; they can be highly addictive, particularly when they are abused.

A large amount of attention has been given to drug overdose deaths related to painkillers such as OxyContin, Vicodin, and morphine. However, a growing number of prescription-related deaths are also caused by so-called study drugs that are prescribed for ADHD treatment. These types of drugs include Adderall, Ritalin, Concert a, Dexedrine, and Vyvanse. The risk of addiction is high with these medications because they’re often used nonmedically—that is, without a prescription or outside their recommended usage. Many people use them to stay awake or lose weight, which can be extremely dangerous. For example, an Adderall overdose can cause irregular heartbeat; Ritalin can cause dangerously high blood pressure; and amphetamines (including those found in Vyvanse) can lead to seizures and even death.

These are all illegal drugs, but they’re also depressants. If you are suffering from anxiety or depression (or are just feeling down), know that these drugs can make you feel better, rushing. And that’s where their danger lies. If you take them every day, they will eventually reduce your motivation and energy levels, perhaps to a point where getting out of bed feels nearly impossible. In some cases, it can lead to suicide.

A high amount of drug abuse has spread across India, as several studies have reported. Furthermore, countless types of drugs have been found to be being abused in different regions across India. The main types of drugs that are known to be abused in India are namely cocaine, heroin, cannabis and amphetamine-type stimulants (ATS). Moreover, some research has concluded that it is not only adults who are using these drugs, but also children below 18 years old. In addition, there have been reports of people taking more than one type of drug at once. In fact, for example, there was an instance where three people were arrested for possessing marijuana, heroin, and cocaine at once. This shows how widespread drug abuse is in India among all age groups and all types of drugs.

The use of illicit substances such as cannabis or opium dates back to thousands of years ago, when they were used by ancient civilizations for medical purposes.