Sahyog ClinicBlogTreatmentHash / Hashish: The Good, the Bad, and the Ugly 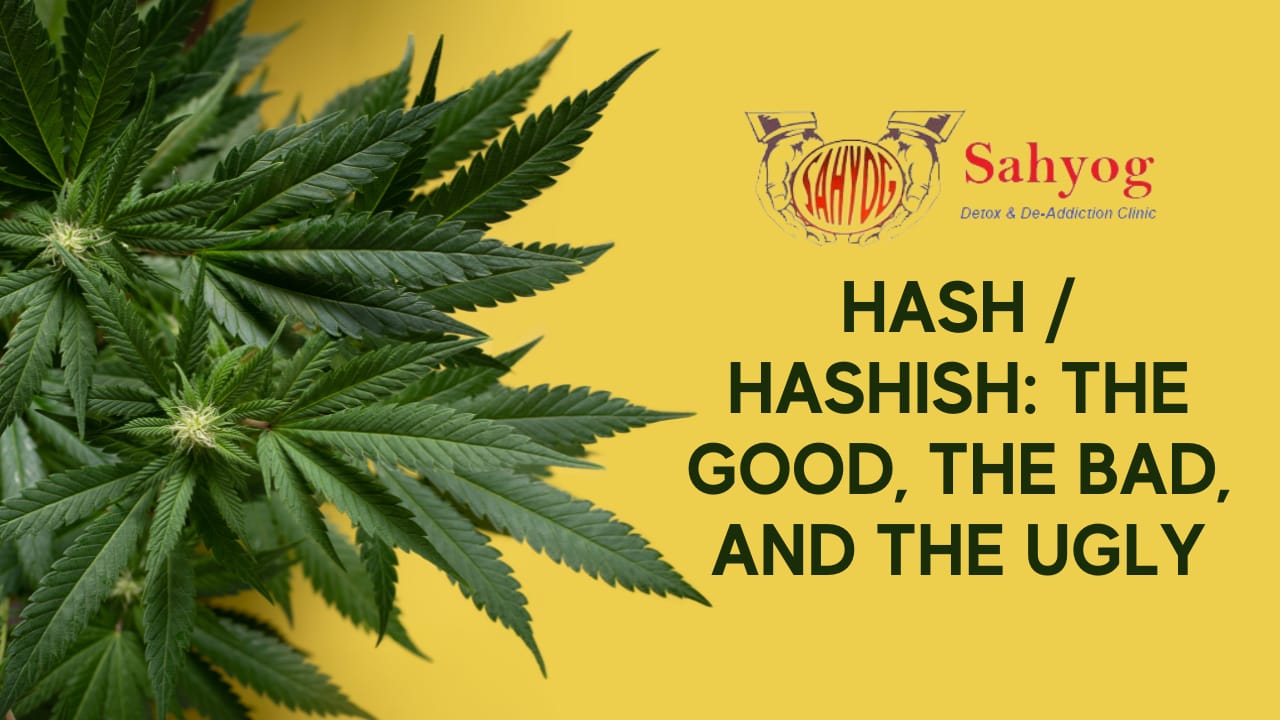 Hash / Hashish: The Good, the Bad, and the Ugly

Hash, also known as hashish, is one of the oldest-known drugs. It can come in many forms, from marijuana to chief to nuggets of concentrated hash oil. While we do not condone the use of illegal substances on this site, we’re interested in exploring the effects that such substances have on individuals and society as a whole. So let’s take a look at what makes hash so popular and what the potential dangers are if you choose to use it recreationally or medicinally.

Hashish/Hash is a thick black substance produced by compressing and drying cannabis flowers. It can be smoked in a pipe or a water pipe, known as a bong. People that use hash are called hash smokers. Hash has been around for thousands of years, so if you wonder how long hash has been around? For thousands of years, apparently! Some people have said that it was used as early as 4,000 BC. That would make it one of the oldest drugs to ever exist. Many people don’t know much about hash because it isn’t very popular anymore, but back in its heyday, hash was extremely popular. Back then, there were tons of different types and brands to choose from. Some were even made with pure gold!

But today, there aren’t many options when it comes to buying hash. Most of what you find on the streets is pretty low-quality stuff that just makes you high for a short period before giving you a headache and making your stomach hurt. Although once upon a time, hash was superb stuff and numerous people loved smoking it every day. In fact, some people say they wouldn’t smoke anything else because they enjoyed it so much.

How does it make you feel?

Hash is typically consumed by smoking it; however, many people use a water pipe to smoke hash. This method of consumption has a different effect on your body than smoking—mainly because you’re not actually burning hash itself. The effects of hashish vary depending on how it’s ingested, but here are some common experiences with various methods of ingestion.

It should be noted that dosage varies from person to person. When smoked or vaporized in a bong or pipe, users can expect an immediate high followed by a euphoric feeling for several hours. When eaten or drunk in an edible form, users experience an intense high that lasts anywhere from 20 minutes to 2 hours.

In addition to varying levels of intensity, there are also differences in terms of duration and after-effects. For example, eating hash leaves users unable to walk properly or speak clearly while they’re high; they may also feel nauseous afterward. Drinking it leaves them more able to function normally (though still impaired), but they may have trouble sleeping later that night.

What are the short-term effects of hashish?

Smoking or ingesting hashish can be a euphoric experience for some, with feelings of happiness, relaxation, and even mild hallucinations. Short-term side effects may include mental fogging and loss of focus; you could also experience nausea or vomiting. These short-term effects are due to a high concentration of delta-9 tetrahydrocannabinol in the hash.

It is Responsible for most of marijuana’s psychological effects. When consumed, THC binds to cannabinoid receptors in your brain that control memory, pleasure, thinking ability and coordination.

Any type of cannabis use can produce euphoria, relaxation, or a general feeling of well-being. Other short-term effects may include creativity, forgetfulness, and hunger. Those who have consumed cannabis may feel tired or drowsy afterward; others may experience increased energy. For new users, however, these effects are usually more pronounced than for regular consumers.

It’s commonly agreed that cannabis is not addictive. However, one study found that 10 percent of regular users do meet diagnostic criteria for cannabis use disorder. This means that about 1 in 10 heavy users may develop a problem with hash use. People who smoke hashish daily are most at risk of developing an addiction to it. And if you don’t smoke it daily but did in your early years, you may be more prone to addiction as well.

If you want to avoid becoming addicted to hash, avoid smoking or ingesting too much of it too often. If you think you might have developed difficulty with hash, talk to your doctor or another health professional right away. He or she can help get you started on treatment. Treatment programs vary depending on what kind of drug abuse treatment program they offer; some programs focus only on drugs like alcohol and cocaine, while others specialize in helping people recover from addictions like heroin or methamphetamine abuse.

While alcohol is certainly not a gateway drug on its own, it makes hash a lot more dangerous. Mixing these two drugs can be very dangerous (and even deadly). As an example, there are many reports of individuals overdosing on hash after mixing with alcohol—many of them died from respiratory failure. These are only some negative consequences associated with mixing alcohol and hash.

In addition to these risks, research has shown that combining alcohol and marijuana can cause individuals to drink more than they intended. So be careful when you mix!

Not all highs are created equal. There’s no doubt about it; getting high on weed can be pretty fun, but if you’re thinking about experimenting with hash, don’t do so without understanding what you’re getting into first. Remember: not all highs are created equal! It’s important to keep in mind that getting high is different for everyone and depends largely on factors like your body weight and tolerance level.

Can I overdose on it?

While hash is not as potent as other drugs like heroin or LSD, you can still overdo it. In fact, there’s such a thing as hash overdose; if you use too much of it too often, your body can get confused about how much you’ve used. If you start having strange reactions to smaller doses of hash or other drugs after using for a while, go to an emergency room immediately—you may be dealing with a hash overdose.

You might also have an allergic reaction to hash, which could cause symptoms ranging from mild itching and hives to difficulty breathing and heart palpitations. See a doctor right away if you suspect an allergic reaction. Inhaling too much smoke can irritate your lungs and lead to coughing fits that make it hard to breathe. It can also trigger asthma attacks in people who already suffer from respiratory problems. And although there aren’t any conclusive studies on whether hash smoke causes cancer, long-term users are at risk for developing lung disease, bronchitis, emphysema, chronic coughs and shortness of breath—especially if they smoke while consuming alcohol or tobacco products.

Have you ever smoked hash? Or maybe you’ve never tried it. Either way, here are some pros and cons to help you better understand if it’s something worth trying. First, let’s start with a quick overview of what hash is—hash is basically concentrated cannabis. It comes in many forms including chief (or chief), bubble hash, ice-water extractions, dry sift, and more. Each form has its own unique characteristics that make it appealing for certain people or situations.

In short, if you’re a casual user of hash—someone who uses it infrequently and in moderation—you’re not likely to experience any negative long-term effects. And for those who use it only occasionally, its mind-altering effects may well outstrip any issues associated with regular use. But if you smoke daily or have a more serious addiction to hashish, you could be doing permanent damage to your body. If you want to preserve your health, avoid smoking as much as possible.

Don’t let yourself get caught up in an unhealthy habit that will take years off your life.

For most people, however, there are few reasons to worry about occasional marijuana use. As long as you don’t overdo it, occasional consumption is unlikely to do any harm at all.

Just make sure you keep your smoking sessions brief and infrequent. If your body starts to feel ill after a session, cut back on your hash intake or consider abstaining altogether. Smoking too much hash can lead to anxiety, depression, insomnia, headaches, chronic coughing, and other serious health problems.